16 December 2015: A tradition that many people have at this time of year is watching Frank Capra’s It’s a Wonderful Life. Capra made the film “to combat a modern trend toward atheism.”1 Individual opinions of the film range from its being the best movie ever made to its being too sappy to endure. I happen to enjoy it—a lot, and so does my whole family. Not only that, but I think it has more depth than many people realize. Some of the central themes of It’s a Wonderful Life are soundly biblical, and they are good lessons for Christians to know and live by. So, I’m going to do something unusual. I’m going to use It’s a Wonderful Life to illustrate some biblical principles.

Before continuing, we should set a couple of ground rules. Let’s not allow ourselves, as biblical Christians, to become distracted by such nonsense as angels’ wings and entering an alternative reality in which one hasn’t been born. The angel in the story merely adds to the cuteness and humor and no one intended him to be a serious depiction of one of God’s angels. The alternative reality is the vehicle the story uses to convey its messages. Let’s just concentrate on those.

I think the primary theme of It’s a Wonderful Life is that a man’s worth doesn’t lie in his bank account, his education, or his prestigious job. George Bailey wanted to get out of his crummy little town, see the world, get a higher education, land a good job, and make money. He did none of that. What he did do was sacrifice his own wants to help ease the burdens of his fellow humans. His good works did not earn him eternal life. They caused him to be highly valued and well loved in his community, and made him a good example of sacrificial love. Bedford Falls would have been a much poorer and more degraded place if George Bailey had never lived.

Mr. Potter, on the other hand, was despised in the town because he valued only money and business, and he cared nothing for his fellow man. Sadly, many who vociferously call themselves Christians today more closely resemble Potter than George. Their talk is of money and investments, the laziness of the poor, and the dangers posed by immigrants fleeing oppression and war. (By the way, Americans, whatever happened to the “land of the free and the home of the brave”?)

In Luke 12:15, Jesus said, “Beware! Keep yourselves from covetousness, for a man’s life doesn’t consist of the abundance of the things which he possesses.” He then gives a parable of a rich man who has an abundance of crops. Instead of giving the excess to the poor, he plans to tear down his barns and build bigger ones. God, however, takes his life that night (verses 16-21). Unlike George Bailey, I don’t think that man would have been missed.

In 2 Corinthians 9:6-7, Paul writes, “Remember this: he who sows sparingly will also reap sparingly. He who sows bountifully will also reap bountifully. Let each man give according as he has determined in his heart; not grudgingly, or under compulsion; for God loves a cheerful giver.” “Cheerful” in verse 7 is from the Greek hilaros. It’s the word from which we get the English word, “hilarious.” Are you a hilarious giver?

What does the Bible say about the rich?

Charge those who are rich in this present world that they not be haughty, nor have their hope set on the uncertainty of riches, but on the living God, who richly provides us with everything to enjoy; that they do good, that they be rich in good works, that they be ready to distribute, willing to communicate; laying up in store for themselves a good foundation against the time to come, that they may lay hold of eternal life.
1 Timothy 6:17-19

Potter apparently never heard or didn’t heed these instructions. So, there’s a Scripture for him, too:

Come now, you rich, weep and howl for your miseries that are coming on you. Your riches are corrupted and your garments are moth-eaten. Your gold and your silver are corroded, and their corrosion will be for a testimony against you, and will eat your flesh like fire. You have laid up your treasure in the last days. Behold, the wages of the laborers who mowed your fields, which you have kept back by fraud, cry out, and the cries of those who reaped have entered into the ears of the Lord of Armies. You have lived delicately on the earth, and taken your pleasure. You have nourished your hearts as in a day of slaughter. You have condemned, you have murdered the righteous one.2 He doesn’t resist you.
James 5:1-6

Yes, the very heart of It’s a Wonderful Life is biblical. George loved his neighbors as himself (James 2:8). Potter loved no one but himself.

Know that Suffering May Be Unrelated to Good or Evil

Think about it. At the end of the movie, George, who had been only a blessing to others, had suffered greatly. How much did wicked Potter suffer? Zero. George’s suffering is founded on his looking at his life with mixed up standards. He was doing the right things, but his thinking was upside down. He believed that he’d lived a mediocre life, which, by his wrong standards, made him a failure. Then, when time and chance that happens to us all (Ecclesiastes 9:11) happened to George in the form of Uncle Billy losing the money, he went to pieces. The physical solution to George’s problem, the town collecting the money to bail him out, could have happened without George suffering in the alternate universe in which he’d not been born. But the possibility of the town helping him didn’t even occur to George because his beliefs about his own life, the standards he had set for himself, were so off base. It was to solve the real problem, straightening out George’s thinking, that God caused George even more suffering. George didn’t suffer because he was bad. God brought him suffering to open his eyes.

George’s real problem was internal. He needed to see his life the way God did. To both correct his thinking and bring him to the crisis point in which he reached out in faith, God caused him to suffer. As you watch the film again, carefully notice that God did not bring George out of the alternate universe until George stopped trying to faithlessly solve his problems himself, until he stopped his cynicism, and until he stopped calling out to Clarence the angel for help. God waited until George cried out to Him for help.

There is a very specific moment in the movie when this takes place. Remember that before 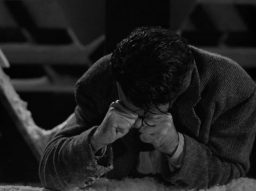 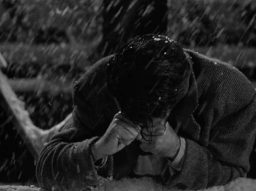 God has answered his prayer. George has left the world in which he has not been born and has returned to his world in which he is again born (born again). His lip is bleeding, and he has Zuzu’s petals. Although he doesn’t yet know it, his financial problems are solved. The real miracle, however, is that George now sees his life the way God sees it, and he becomes aware of the love that surrounds him (John 3:3).

Jesus corrected people who thought that suffering was always the result of sin (Luke 13:1-5). Of course, sometimes it is, but who are we to judge? Suffering may be the way God is brining someone to salvation. Jesus said that a man was born blind, not because of sin, but “that the works of God might be revealed in him” (John 9:2-3). Suffering may have other reasons. Who knows? Let’s not be condemning.

Don’t Wait Around for God to Punish the Wicked; Think about Your Blessings

Be a Faithful Steward, and Be Content Where God Has Placed You

George was faithful with what he was given. It wasn’t as much as Potter had, but he used it to improve life in Bedford Falls. He was a good and faithful servant over a few things. If George Bailey were a real person, I would expect that the day would come when he would be set over many things (Matthew 25:21). But what God does with people is up to God.

In Acts 17:26, Paul may have been speaking about God’s sovereignty over the nations. Nevertheless, there is an application even to the individual level. God has appointed our seasons and the boundaries of our dwellings. Like Paul, and as George apparently learned, we should learn that, in whatever state we are, we should be content in it (Philippians 4:11).

As George comes to suspect that he’s back in his universe, he does two things to prove it to himself. He touches the blood on his mouth, and he pulls out Zuzu’s petals. The shedding of blood was due to his stupidity, and I see Zuzu’s petals as symbolic of the important things in life, their precious fragility, and how we should always keep them close to us. He then runs home, shakes hands with his accusers, hugs and kisses his children, kisses his wife several times, and rejoices with his friends and neighbors singing a song that includes the words, “God and sinners reconciled,” and, “Born to give them second birth.” George has realized what a wonderful life he really has. Let’s all do the same. Let’s remember what’s really valuable and count our blessings and help those who are suffering. “Rejoice in the Lord always! Again I will say, ‘Rejoice!'” (Philippians 4:4).

A toast to my big brother George: The richest man in town.
Harry Bailey 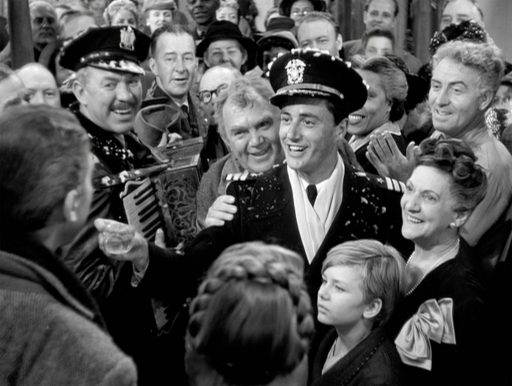 2. Not meaning Christ, but merely meaning any righteous person. In this case, it would be George, whom Potter had surely murdered in his heart. Return