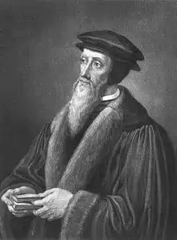 When Paul says that we cannot be justified by the works of the law, he means that if we claim to merit grace and salvation because God has promised that those who observe the law will be accounted as righteous, we are completely mistaken; for no one keeps the law perfectly. We must realise that we all stand guilty before God and have the sentence of condemnation hanging over our heads…. We must, therefore, conclude that we cannot obtain righteousness by the law, and that if we believe we can make God our debtor, we will only provoke his wrath. The only option is to come as poor beggars, that we may be justified by faith. Not as if faith were a virtue proceeding from us, but we must come humbly, confessing that we cannot obtain salvation except as a free gift. This, then, is why the law is put in opposition to faith. Paul is showing us that all who claim to be acceptable to God by their merits are turning their back upon the grace of the Lord Jesus Christ…. Every created thing has its function — and fire and water complement each other very well; however, if we were to mix them together, then they would indeed clash! This is true of the law and the gospel. Those who believe that we are justified by the law as well as the gospel are confusing everything; it is as if they are crashing heaven and earth together! In short, it would be easier to mix fire and water than to say this: that we can merit a measure of the grace of God and yet also need the aid of the Lord Jesus Christ…. May we learn so to magnify his grace, as it is shown to us in the Lord Jesus Christ, that we might be completely taken up with it; and may we not only do so with our lips, but place our entire trust in him.
“Justification is by Grace Alone“

Lest anyone think that Calvin taught merely that we are justified by grace alone but we must then go on to perform works, I quote the following:

We see that our whole salvation and all its parts are comprehended in Christ [Acts 4:12]. We should therefore take care not to derive the least portion of it from anywhere else. If we seek salvation, we are taught by the very name of Jesus that it is ‘of him’ [I Cor. 1:30]. If we seek any other gifts of the Spirit, they will be found in his anointing. If we seek strength, it lies in his dominion; if purity, in his conception; if gentleness, it appears in his birth. For by his birth he was made like us in all respects [Heb. 2:17] that he might learn to feel our pain [compare to Heb. 5:2]. If we seek redemption, it lies in his passion; if acquittal, in his condemnation; if remission of the curse, in his cross [Gal. 3:13]; if satisfaction, in his sacrifice; if purification, in his blood; if reconciliation, in his descent into hell; if mortification of the flesh, in his tomb; if newness of life, in his resurrection; if immortality, in the same; if inheritance of the Heavenly Kingdom, in his entrance into heaven; if protection, if security if abundant supply of all blessings, in his Kingdom; if untroubled expectation of judgment; in the power given to him to judge. In short, since rich store of every kind of good abounds in him, let us drink our fill from the fountain, and from no other.
John Calvin, Institutes of the Christian Religion (1559), 2.16.19

It seems that many so-called Calvinists are among the greatest legalists, looking to the law for at least some part of their salvation. They did not get such thinking from what Calvin says here.

It is usually sanctification that is the sticking point for those who do not quite believe in salvation by grace alone. They will often acknowledge justification by faith alone, but they will say that sanctification requires our obedience to the law. But in 1 Corinthians 1:30-31, Paul says, “But of him are ye in Christ Jesus, who of God is made unto us wisdom, and righteousness, and sanctification, and redemption: That, according as it is written, He that glorieth, let him glory in the Lord.” Baptist theologian and pastor, John Gill (1697-1771), commenting on this passage says,

Christ is the sanctification of his people, through the constitution of God, the imputation of the holiness of his nature, the merits of his blood, and the efficacy of his grace, he is so “federally” and “representatively”; he is their covenant head, and has all covenant grace in his hands for them, and so the whole stock and fund of holiness, which is communicated to them in all ages, until the perfection of it in every saint: this is sanctification in Christ, which differs from sanctification in them in these things; in him it is as the cause, in them as the effect; in him as its fountain, in them as the stream; in him it is complete, in them it is imperfect for the present: and they have it by virtue of union to him; sanctification in Christ can be of no avail to any, unless it is derived from him to them; so that this sanctification in Christ does not render the sanctification of the Spirit unnecessary, but includes it, and secures it: likewise Christ is the sanctification of his people “by imputation”, as the holiness of his human nature is, together with his obedience and sufferings, imputed to them for their justification; Christ assumed an holy human nature, the holiness of it was not merely a qualification for his office as a Saviour, or what made his actions and sufferings in that nature significant and useful, or is exemplary to men; but is a branch of the saints justification before God: the law required an holy nature, theirs is not holy; Christ has assumed one not for, himself, but for them, and so is the end of the law in all respects.

And, indeed, those who reject sola gratia are, in one respect or another, legalists. And legalists deny at least some of the work of Jesus Christ, which makes them antichrists (see “Are You Following the Doctrines of Antichrists?“).

One of the most consistent characteristics of cults is that they teach that salvation is not by grace alone. Works always figure into what is necessary for salvation. For example, in Mystery of the Ages, Herbert W. Armstrong wrote: 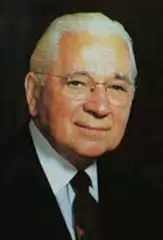 The “salvation” in what is called traditional Christianity does not actually change one into a new and different person. Too often ministers and evangelists tell people that if they have just “received Christ,” “accepted Christ,” or “given their heart to the Lord,” they are saved. They are already “born again.” It is as if some mystic switch has been flipped and the person will be shot instantly up to heaven upon death, which so many believe is not really a death after all.
Herbert W. Armstrong, Mystery of the Ages, softcover edition, (Pasadena, CA: Worldwide Church of God, 1985) October 1985 printing, 197

The very basic teaching, belief and doctrine of God’s true Church therefore is based on the righteousness of and obedience to the law of God.
Herbert W. Armstrong, Where Is the True Church?, 32

Armstrong was the founder of the Worldwide Church of God and clearly did not believe in salvation by grace alone. Many of his disciples now run their own churches and teach the same unbiblical doctrines.

The Jehovah’s Witnesses are a cult that rejects salvation by grace alone. The following quotes are from their own publications:

[Belief] involves taking in accurate knowledge of God’s purposes and his way of salvation. Then faith has to be exercised in Jesus Christ as the Chief Agent of salvation.This places the Christian in a saved condition, but he must now persevere in doing God’s will and continue to adhere to all of God’s requirements for the rest of his life. Only then will he be saved to eternal life.
Watchtower (December 15, 1989) 30

We have to do more than merely accept the Kingdom message in order to be saved.
Paradise Lost to Paradise Regained, 249

God requires that prospective subjects of his Kingdom support his government by loyally advocating his Kingdom rule to others.
Watchtower (February 15, 1983) 12-13; emphasis theirs

God’s will is that, to make good his salvation to everlasting life, the believer must be a preacher in this world.
This Means Everlasting Life, 137

This sure explains why the Jehovah’s Witnesses who come to our doors are so zealous. How sad that these people have been deluded to think that they must save themselves by their works.

To be forgiven of our sins, we need to repent and increase our faith in Jesus Christ throughout our lives. We will not be saved simply because we get baptized or say we believe in Jesus Christ. It takes work, but the work we do doesn’t only prepare us for heaven, it blesses us in this life too.
“Jesus Christ Is the Way“

You can find more information about Mormonism in my article, “Mormons Are Not Christians”